Well....Im a few glasses of Moscato in and I can't sleep right now. Today has been interesting to say the least. An F-5 tornado just tore through my neighborhood this afternoon. When I say that I mean, "My Neigborhood". The Moore Medical Center, The Warren Theatre, the 7-11 I pass every morning on the way to work. My son's daycare is actually right next door to the hospital that was ripped apart. These normal businesses now feel like landmarks in the wake of such a disaterous event. I have to kind of take inventory on myself at this moment. I don't consider myself a skeptic or a cynic but I don't feel the need to get as worked up or nervous about things as others at times. However at this moment, I'm left in awe of the power of nature. As I was leaving work monday afternoon, I began to read all of the text messages I hadn't gotten the opportunity to see yet. All of the concerns and well wishes seemed like people were just overreacting. In my head, it was just another hail storm with alotta noise. No Big Deal. It wasn't until I read my fiancee's message telling me she picked up my son and was headed to her mothers. I turned on the radio and heard the meteorologist calling out the same busy cross section near my home. Immediately, I called my fiancee and made sure she was safe. She told me she was at her parent's home in the central closet under mattresses and blankets. Being from Oklahoma, you always have an evacutation plan in case of a tornado, so I was very nervous about the safety of my family. But it was too late for them to leave the storm was on the way. My first instinct was to get as close as I could to my family but my fiancee warned "Dont come towards Moore." The rain picked up and I had difficulty with visibility, so I turned around and headed north to outrun the storm. As I aimlessly drove through the city, I made phone call after phone call to my fiancee. Her phone was going straight to voice mail. After about 10 attempts, I thought about the worst case scenario but I figured the cell towers were probably down. As the weathermen informed everyone it was safe to come out, I decided to head back to Moore to get to my family. The reports were grim. Comparison to Oklahoma's May 3rd Storm, the most devastating in history, made it clear how bad it was. As the radio broadcast's we're telling the public to stay away from the I-35 interstate going into Moore, I though I'd just outsmart everyone by taking the back roads. Turns out I'm not that smart. Traffic into Moore was backed up for miles. I couldn't help but to think about my fiancee, who hadn't text me back at this point. The traffic was a mess. Cars inching from intersection to intersection, Middle road U-Turns, Emergency Vehicles whizzing by. Through all the noise and the chaos that had ruled the day, I had a silent moment of appreciation and happiness, when my fiancee sent me a text saying they were all ok. The grey skies had a calmness now. I could see the beauty in them but they were still intimidating. The burden in my mind was eased away, only to return when I realized that I still hadn't seen my home. After spending hours inching toward home, I came to a familiar street hoping to make it home soon. Unfortunately, I was turned away by officers trying to expedite traffic. Frustrated I decided to take one of the rural backroads into the Moore area in hopes of making it home. To no avail. Turned around once again. I had spent about 4 hours in traffic and hadn't gotten out since leaving work. I hadn't seen any pictures or video feed but only the sound of paniced weathermen and newscasters from my radio. I decided once more to try and get home to see what if anything maybe left of my neighborhood. Wondering...do I have a home? Is my neighborhood still standing? what happens now? As I drove down a muddy telephone road, I saw the road was blocked. I stared into the distance at the emergency lights flashing. I was only 4 blocks away from home. And I could have kept trying. But I thought about the emergency cars I watched speed through traffic coming from every part of the city. I thought about the lil children on the radio talking about there school caving in on them. I thought about Moore Regional Medical Center; where I had gone to wait out prior storms that passed over us. After all of the effort I was making to try and get home and see what was left, I realized the most important part was already safe and sound. My Fiancee and my son were fine. No one in my family was injured and I still had a place to rest my head. So as I sit here in my parents home, I thank GOD for the safety and well being of my family. I dont know what the morning will bring but I thank God I get to see another morning. I am truly thankflu to everyone who kept my family and me in mind, thank u for checking in. I ask for all the prayer warriors to shoot a prayer on behalf of all those affected by this event. I haven't seen my neighborhood but I have faith that my home and many others in the area will still be standing. 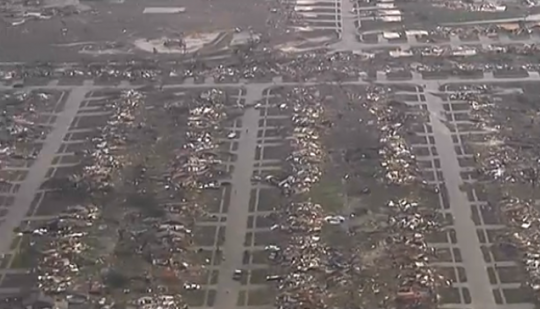