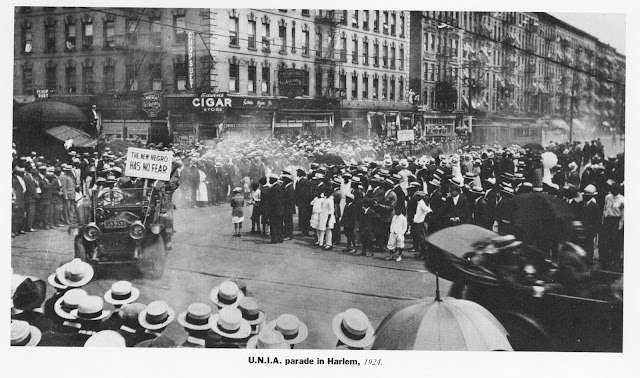 The Harlem Renaissance was a cultural movement that spanned the 1920s. At the time, it was known as the "New Negro Movement", named after the 1925 anthology by Alain Locke. Though it was centered in the Harlem neighborhood of New York City, many French-speaking black writers from African and Caribbean colonies who lived in Paris were also influenced by the Harlem Renaissance.[1][2][3][4]
The Harlem Renaissance is unofficially recognized to have spanned from about 1919 until the early or mid-1930s. Many of its ideas lived on much longer. The zenith of this "flowering of Negro literature", as James Weldon Johnson preferred to call the Harlem Renaissance, was placed between 1924 (the year that Opportunity: A Journal of Negro Life hosted a party for black writers where many white publishers were in attendance) and 1929 (the year of the stock market crash and the beginning of the Great Depression).


The Harlem Renaissance was successful in that it brought the Black experience clearly within the corpus of American cultural history. Not only through an explosion of culture, but on a sociological level, the legacy of the Harlem Renaissance redefined how America, and the world, viewed African Americans. The migration of southern Blacks to the north changed the image of the African-American from rural, undereducated peasants to one of urban, cosmopolitan sophistication. This new identity led to a greater social consciousness, and African Americans became players on the world stage, expanding intellectual and social contacts internationally.
The progress—both symbolic and real—during this period, became a point of reference from which the African-American community gained a spirit of self-determination that provided a growing sense of both Black urbanity and Black militancy, as well as a foundation for the community to build upon for the Civil Rights struggles in the 1950s and 1960s.
The urban setting of rapidly developing Harlem provided a venue for African Americans of all backgrounds to appreciate the variety of Black life and culture. Through this expression, the Harlem Renaissance encouraged the new appreciation of folk roots and culture. For instance, folk materials and spirituals provided a rich source for the artistic and intellectual imagination, which freed Blacks from the establishment of past condition. Through sharing in these cultural experiences, a consciousness sprung forth in the form of a united racial identity.
Email Post