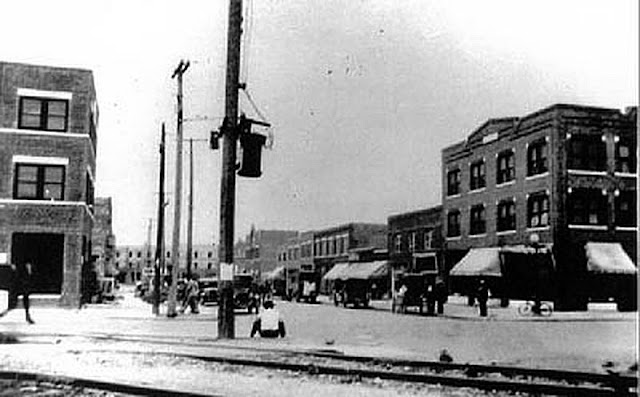 During the oil boom of the 1910s, the area of northeast Oklahoma around Tulsa flourished, including the Greenwood neighborhood, which came to be known as "the Negro Wall Street" (now commonly referred to as "the Black Wall Street")[3] The area was home to several prominent black businessmen, many of them multimillionaires. Greenwood boasted a variety of thriving businesses that were very successful up until the Tulsa Race Riot. Not only did African Americans want to contribute to the success of their own shops, but also the racial segregation laws prevented them from shopping anywhere other than Greenwood.[4] Following the riots, the area was rebuilt and thrived until the 1960s when desegregation allowed blacks to shop in areas that were restricted before.
Detroit Avenue, along the edge of Standpipe Hill, contained a number of higher-end houses belonging to doctors, lawyers and business owners. Also, the buildings on Greenwood Avenue housed the offices of almost all of Tulsa’s black lawyers, realtors, doctors, and other professionals.[5] In Tulsa at the time of the riot, there were fifteen well-known African American physicians, one of whom, Dr. A.C. Jackson, was considered the “most able Negro surgeon in America” by one of the Mayo brothers.[6] Dr. Jackson was shot to death as he left his house during the riot.[2] Greenwood published two newspapers, the Tulsa Star and the Oklahoma Sun, which covered not only Tulsa, but also state and national news and elections. Buildings housing the two papers were destroyed during the riot.[2]
Greenwood was a very religiously active community. At the time of the riot there were more than a dozen African American churches and many Christian youth organizations and religious societies.
In northeastern Oklahoma, as elsewhere in America, the prosperity of minorities emerged amidst racial and political tension. The Ku Klux Klan made its first major appearance in Oklahoma shortly before the worst race riot in history.[7] It is estimated that there were about 3,200 members of the Klan in Tulsa in 1921 .
Email Post