5 Reasons the Dallas Cowboys are failing this season?

So I must say, this season hasn't gone quite the way I had wished. A 5-6 record could humble any fan. Everyone was so optimistic about the season due to last years breakout performance from Demarco Murray, who became another casualty on the long list of injured Dallas Cowboy players. The Defense this year has improved so much that the Cowboys now have a solid defensive reputation. Coach Rob Ryan has done a hell of a job coordinating the defense, but the team still falls short the expected standard of this talented team. From conversations with many Cowboys fans (as well as haters) I have compiled a list of the 5 biggest things holding the Cowboys back this season.

#5 The Greatest of Expectations
Every year since the inaugural season of Tony Romo, The Dallas Cowboys have been the favorite to win the whole thing. Though nothing gets fans (especially Cowboys fans) more excited than hearing the top analyst and reporter pick your team to go all the way. But now its just getting embarrassing. When the same team fails to even make the playoff the two years prior, its beginning to sound more and more unrealistic. Lets just go from week to week and see what happens.

#4 No Discipline with the ranks
The general consensus among most Cowboy fans is that just when things are going well, they shoot themselves in the foot. The big thing is penalties. The Cowboys this year are the second most penalized team in the NFL behind the Redskins. Couple that with the amount of turnovers the Cowboys have and its a recipe for disaster. The Cowboys are currently are ranked 3rd worst in turnovers. Sad.

#3 The Ever-growing injury list
From The Potential Superstar that is Demarco Murray, to the Defensive Leader of the new school, Sean Lee, the Cowboys have amass a crucial amount of significant injuries this season. Dez Bryant and Miles Austin have been the workhorses of this offense, and because of that both get banged up alot. Austin has had to sit down for the better part of the past two seasons due to injury. Defensive injuries like Sean Lee and Newcomer Bruce Carter have depleted the linebacker reserve. Felix Jones taking over the full time responsibility of Halfback doesn't give any fan more optimism due to his lack of production and past injury problems. If this team could stay healthy, The Cowboys could be a strong contender, but with the amount of injuries they have its an impossibility. 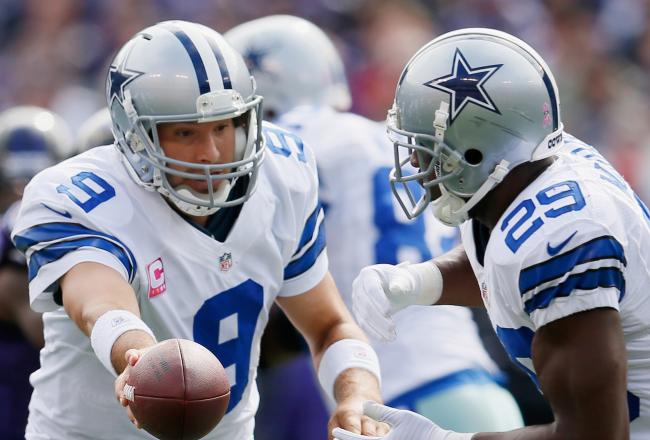 #2 The Forgotten art of running the ball
Dez Bryant, Miles Austin, and Future hall of famer Jason Witten are the workhorses of this offense and Tony Romo's arm is the single sacred weapon that this team has to win games. A healthy Demarco Murray is starting to sound like an oxymoron. He has now been out for 6 Games and The Cowboys have been forced to utilize the 3 backup running backs to replace his production. One Problem....None of them are consistent at running the ball. However there is something to be said about an offense that runs the ball as little as the Cowboys do. Ineffective.

#1 Lack of Leadership
The season to season drama of this Cowboy franchise has been the Jerry Jones Show. Jerry Jones is the real life version of JR Ewing. He's the D-Town King who isn't going anywhere. He knows he's put the piece together to win but what he cant understand is why his perfect formula still hasn't produced another trip to the big show. Most of his handpicked players haven't produced and the more successful coaches fled. So now Cowboy fans are stuck with the lackluster, unimpressive, and overly laid back coaching of Jason Garrett. Since he took over as head coach, the Cowboys have actually declined in many areas. One big thing about Garrett's coaching style is his insistence on remaining the offensive coordinator as well as head coach. But I guess thats the kind of culture that carries throughout the entire team, when the owner is playing general manager as well. With that said no one who follows the Cowboys questions who's in charge. The only real question is, whether or not the team suffers more because of it? A team with 2 leaders, has no leader.

Season aint over yet but it's gonna take alot to turn it all around. But hey when your a true fan you're there through the rough and the smooth sailing. #COWBOYS4LIFE
If ya feel the same way share it!!!
Email Post
Labels: Dallas Cowboys dallas cowboys 2012 dallas cowboys 2012 schedule demarco murray dez bryant felix jones jason garrett jason witten jerry jones miles austin NFC East nfl sean lee Sports tony romo