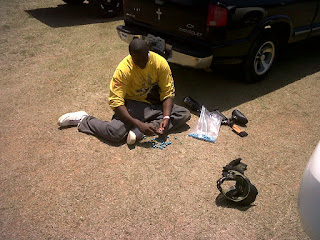 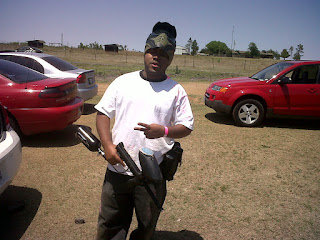 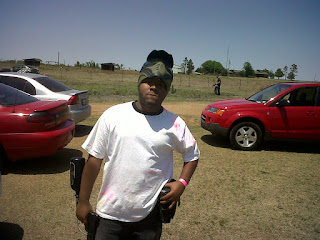 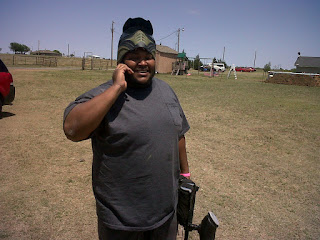 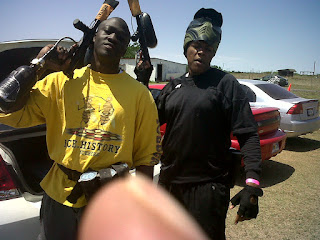 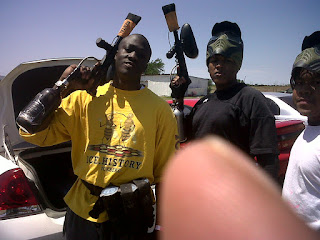 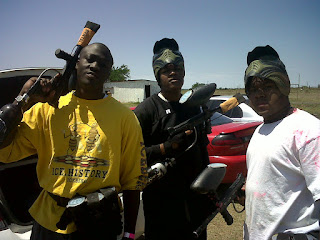 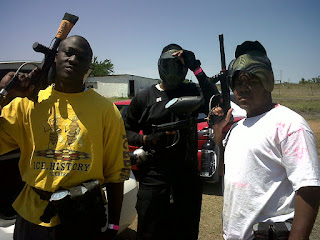 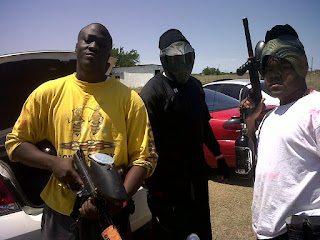 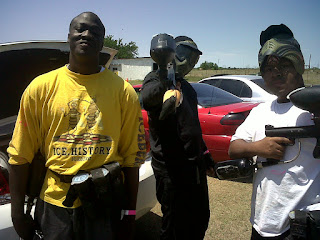 I gotta say it was a good day, yall. My boys and I set out this morning to hit Lawton for the 10 year anniversary at Arena Paintball. So we set it up earlier in the week to meet up around 7-7:30 and head on out around 8. So dispite the fact I woke up late I was still ready to go at 8. So I called up my boy to tell him I was on the way. No Answer.  So after I got close I called up my boy again (WHO SHALL REMAIN ANOYMOUS)
Me: "Ayo, Im down the street bro."
Homeboy: "Uh ok,....uh they say we probably gon leave out around 9 now."
Me: "Oh ok, well Im up the street I'll be there in a minute."
Homeboy: "Oh.....uh.....aight."

After ending the call I could tell something was arie. This wasn't a normal affirmation of "OK come on thru." I was expecting. Yet considering the hour and the groggy sounding voice, I figured "he must've been sleep."
So I arrive at his place and knock on the door. Im waiting, Im waiting, Im waiting......He finally cracks open the door and says in a whisper "whats up, man?". I don't know why every guy has the same look on their face when it happens but all I saw was the sheepish deer in the headlights look on his face. Im smiled and asked, "You gotta girl in there dont you?" We laughed as I left to give him some more time.

So we finally start the road trip, My boys KP, Frank, Rodrick and me on our way to Lawton. We get there and there and theres about 12 people there when we arrive. This was KP, Rodrick, and my first time ever going paintballing, so we got a little intimidated by the army uniforms and military AK47 looking paintball guns some of these cats were pulling out. As we were waited to check in, it seem like every car was filled up with cats in professional paintball gear or Military Uniforms. So after a careful evaluation of the situation, all we could say to one another was, "Man, we bout to get F****ED UP!" LOL.

All in all I have to say that this was one of the best times I've actually had in a while. After we got out there and got to shooting around, the initial nervousness of "Getting Hit" sudsided. I wasn't really that painful.(Except for my boy Rodrick, He got messed up! LOL). Frank was like a straight up assasin (Its always the quiet ones), Rodrick thought he was really playin BLACK OPS lol, and KP turned into a damn rainbow from taking all those hits lol. As for me, TRIGGERMIKE,  I probably killed about 30 suckas today you know. "SOMEBODY HAD TO PAY!" (No just kidding, Maybe 10 guys) Honestly, it was really a fun experience everyone needs to do it at least once(A MONTH). We talked about making it a regular thing if we can find some spots closer to the city, so if ya know of any or wanna get down hit me up.
- LATER ON
Email Post